(some restrictions may apply)

· Cannot be combined with any other discount

· Print this coupon to redeem voucher

· We reserve the right to cancel promotions at any time

I was at work tidying up my truck before heading out when a customer called and asked specifically for Mike. My co-worker was already out on a job and so I asked if I could be of help. The client introduced himself as Mr. Taylor and explained that he had worked with Mike about a year ago, was very happy with the service then and needed our assistance pretty urgently again. He asked my name. I said Tom and he said “well, Tom, if you are as good as Mike, please come out to fix my lock. I can put the key in, but I can't turn it all the way”. I laughed at his tease and promised to be in his house as soon as possible. I still had some time before my other scheduled appointment and Mr. Taylor's wasn't too far out of my way anyway.

In my many years on the job, I have learned a couple of shortcuts and so despite the traffic I was at the client's house in about ten minutes. “Woh, you are even faster than Mike” he said and we both laughed. I am really happy when customers say good things about my colleagues and I because I am under the impression that we have a very good team here and such remarks just prove to me that I'm right. Anyway, I got my tools and went straight up to check the lock. This was a rather expensive security door lock and I told Mr. Taylor that he had made a very good choice and that he shouldn't worry because I would fix it. I had to disassemble it and then align the strike plate, too. There was an issue with the movement of the bolt but it was repaired.

Mr. Taylor was standing right beside me. He told me about how he found our company through a friend and about his experience with Mike about a year ago when he had to rekey his car's ignition. I was done with my work before he was done with his story but encouraged him to carry on. He told me how fast Mike helped him and that he called back not only because of his good work, but also because Mike was really friendly and nice. Then he shook my hand and congratulated me, too. He told me that he was even happier now because he had two locksmiths to trust.

It's very important to us when a client who has worked with us before calls back for assistance. This means that he was happy the first time and trusts us with his security once more. This was the case with Mr. Taylor as well, but I was twice as satisfied with this particular case because this customer kept on saying good things about me and Mike until I left his property. It's really encouraging listening to the client complimenting our locksmith company and I can only say that he made my day!

Our services location
Our Services

Our company services in La Crescenta 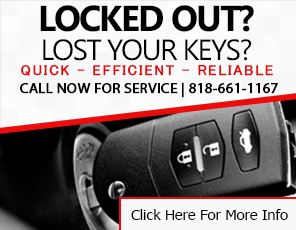